Vera Manuel devoted her life to encouraging others to free ourselves through the use of our personal voices. Telling the truth is disarming, speaking your truth is a generous and healing gift.

"I wasn't trained for anything" 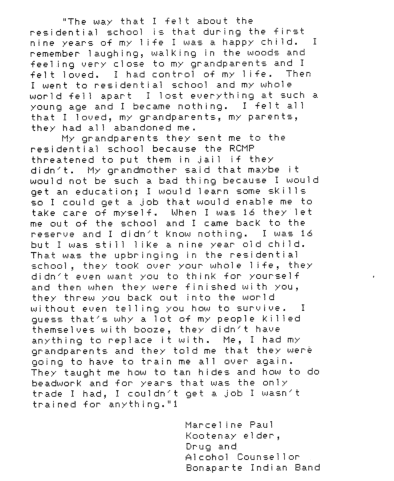 Excerpt from "Indians and Residential School: A Study of the Breakdown of a Culture" by Vera Manuel, 26 April 1987
Posted by Joanne Arnott at 3:20 PM No comments:

The People & The Text: Vera Manuel 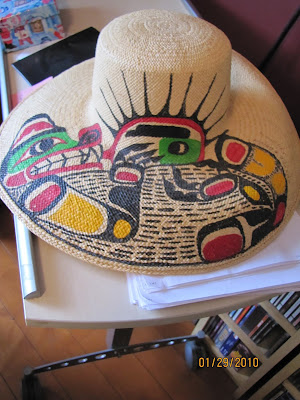 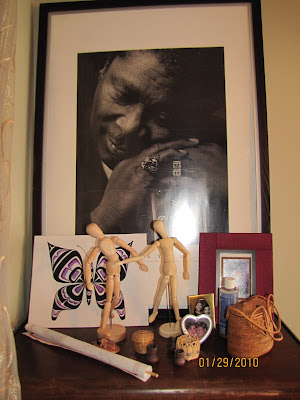 Vera Manuel (Kulilu Paⱡki Butterfly Woman) was an important poet, playwright, and dramatherapist. Drawing on her family’s experiences with the residential school system and the intergenerational trauma it gave rise to, as well as her own experiences with the healing power of writing and performing, Manuel composed a number of poems and plays, established dramatherapy groups and workshops, and, throughout her lifetime, became a respected activist and keynote speaker at several national and international conferences.

Vera Manuel was born on March 20, 1948 into a culturally and politically active family. Her mother, Marceline Paul (Ktunaxa), was a drug and alcohol counsellor, cultural leader, and respected elder. Her father, George Manuel (Secwepemc), was an influential activist both in Canada and abroad; he was President of the North American Indian Brotherhood (1959-1960), Chief of what was formerly the Shuswap Indian band (1960-1966), Chief of the National Indian Brotherhood (1970- 1976), President of the World Council on Indigenous Peoples (1975-1981), and President of the Union of British Columbia Indian Chiefs (1979-1981).

As a child, Vera Manuel grew up on the Neskonlith Reservation in the interior of British Columbia. While she and some of her siblings were able to attend local public schools, her younger brothers and sisters attended residential schools in Kamloops, Cranbrook, Port Alberni, and Mission. Both the immediate and the intergenerational impacts of Canada’s residential school system played a significant, but largely silent, role in Manuel’s family history—a theme she repeatedly returns to in her poetry, plays, and short stories. Although Manuel grew up aware of her mother’s and father’s experiences as survivors of what she has called “a world of violence and isolation” (26)[1]—of residential schools and tuberculosis sanatoriums—she did not learn about the physical and sexual abuse her parents experienced until much later in her life, when her mother began to share stories about her childhood and adolescence at St. Eugene’s Residential School. Much of Vera Manuel’s work, such as her critically acclaimed play, Strength of Indian Women, returns to the stories her mother and other women told her, and reflects on the effects that unacknowledged trauma can have on people’s lives, including her own.

The relationships between storytelling, writing, healing, and performing had always played an important role in Manuel’s life. As a young adult, she kept journals and wrote her own poetry. She lived in Vancouver for several years where she studied history, Indigenous culture, and writing at the University of British Columbia and at Langara College. Yet Vera Manuel did not fully realize her vocation as a creative writer, poet, and playwright until she was in her forties, after she returned home from having lived in Los Angeles with her sister, Emalene (Arlene), for several years. Following her return in the late 1980s, a number of deaths, several of which were suicides, occurred in her network of family and friends as well as in neighbouring communities—a pattern that, as Emalene notes, made the Manuel family “dizzy with grief” (3).

After the passing of her mother in 1988 and her father in 1989, Vera Manuel was contracted to write her first play, Song of the Circle, for a youth conference.[2] In the same year, she had begun co-writing a project called In the Spirit of the Family, a training manual for a national organization for treaty directors. In an interview she gave for Redwire with Peter Morin, Manuel remarks that the process of writing the manual allowed her to begin reflecting on how much work she had to do in relation to her own family’s trauma, a process she had been coming to terms with ever since her mother began speaking about residential school shortly before her death. Around the same time, Vera Manuel began group therapy with Emalene and, feeling that others like her could benefit from what she had learnt, decided to start her own workshops shortly thereafter, which drew on Family Systems Theory and Indigenous Knowledge Systems as therapeutic models.[3]

In the early nineties, Vera Manuel began working on Strength of Indian Women,[4] perhaps her most well-known play on residential schools, abuse, intergenerational trauma, and healing. In the years that followed, she went on to write Journey through the Past to the Future, Echoes Of Our Mothers’ Past, and Every Warrior’s Song as well as a number of other plays she co-authored with other women.[5] She also wrote several short stories, including “That Grey Building,” “Theresa,” “The Letter,” and “The Abyss”; only the last one was published during her lifetime. She also wrote many poems, a handful of which have been included in The World Poetry Anthology (2002), ROCKSALT: An Anthology of Contemporary B.C. Poetry (2008), Salish Seas: an anthology of text + image (2011); the largest collection of her poetry is included in Honouring the Strength of Indian Women (2019).

Throughout the last two decades of her life, Vera Manuel’s role as an artist, activist, therapist/healer, and cultural leader took various forms: she continued to facilitate healing groups, was a curriculum developer and keynote speaker at several national and international conferences, worked with other activists and artists on CDs, educational videos, and films, and was responsible for writing two journal publications and a number of training manuals.[6]

In 2004, she was diagnosed with pulmonary fibrosis, which threatened to curb her impressive literary and cultural output. Despite her illness, she remained very active in her community.

From 2004-2005, she was contracted through Helping Spirit Lodge Society to do storytelling work and develop a Drama Therapy Program, a position which allowed her to continue working while remaining closer to home. She was also a featured poet and member of World Poetry (WP), and was awarded the World Poetry Lifetime Achievement Award. She continued holding poetry readings and conferences until her health took a turn for the worse. She passed away peacefully at Vancouver General Hospital on January 22, 2010, at the age of 61.

---. “When I First Came To Know Myself” and “Two Brothers.” Salish Seas: an anthology of text + image. Edited by Joanne Arnott and Michelle Sylliboy. Aboriginal Writers Collective West Coast, 2011. pp. 68-70.

---. Interview by Peter Morin. “Letting go of Trauma On and Off Stage.” Redwire. Accessed March 16, 2018. https://users.resist.ca/www.redwiremag.com/lettinggooftrauma.htm

Vera Manuel entry by Lara Estlin, March 2019. Lara is a former SFU student who completed her English Honours project on Indigenous authors William Apess (Pequot) and George Copway (Anishinaabe). She works as a research assistant for the Department of First Nations Studies at SFU.

Please contact The People and the Text at people_text@sfu.ca with any comments or corrections.

Posted by Joanne Arnott at 5:14 PM No comments:

Labels: EA Manuel, The People and the Text, Vera Manuel 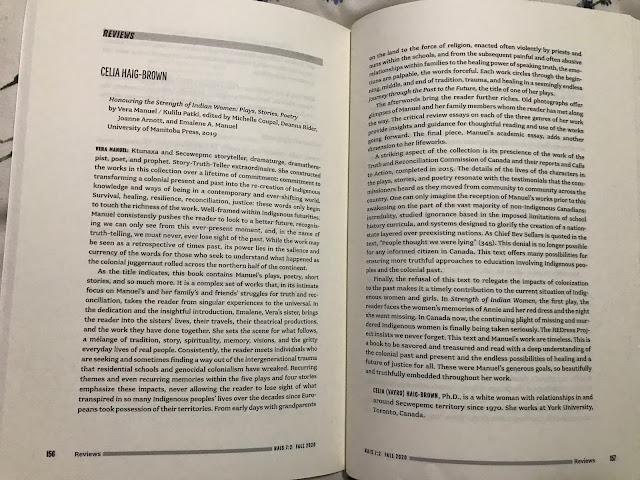 Posted by Joanne Arnott at 5:36 PM No comments: