Vera Manuel devoted her life to encouraging others to free ourselves through the use of our personal voices. Telling the truth is disarming, speaking your truth is a generous and healing gift.

For those who'd like to "Idle KNOW More," here's an excellent panel to attend:

A public panel on Indigenous issues 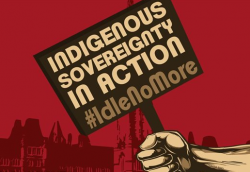 » More information
This panel is open to the public. All are welcome to attend, especially
non-Natives to understand the long history of racism and colonialism in
Canada against Indigenous people that has given rise to the current Idle
No More movement, to highlight and lift the voices of Indigenous peoples
resisting across these lands, and to think through how to be more informed
and responsible allies.
Please spread the word - encourage your friends, your family, your
co-workers, your faith group, your community/student group to attend.
Accessibility info:
http://www.vpl.ca/branches/generic/accessibility_at_the_central_library
* Territorial opening by Cease Wyss: T’Uy’Tanat-Cease Wyss is
Skwxw’u7mesh ethnobotanist, media artist, educator, and food security
activist. She has stood up with other Indigenous Peoples to fight for
native peoples’ rights to hunt, gather, and fish in their traditional
territories.
* Arthur Manuel: Art is a spokesperson for the Indigenous Network on
Economies and Trade and Defenders of the Land network. Former
chairperson of the Interior Alliance of BC First Nations, Manuel has been
a leading voice of opposition to the Canadian government’s agenda to
“extinguish” Aboriginal and Treaty rights and assimilate Indigenous
peoples into the Canadian body politic. Active locally in Secwepemc land
struggles, and at the national level, he has also taken the
struggle international at the UN Permanent Forum on Indigenous Issues,
following in the path of his father, the late George Manuel, President of
the National Indian Brotherhood and founder of the World Council of
Indigenous Peoples.
* Darla Goodwin: Singing Thunderbird Child-Twice Standing Woman is a
Cree Ojibwa from Peepeekisis First Nation in Saskatchewan. She is a
knowledge keeper, carrier of the Sacred Correction Pipe for the
Desecration of the female side of life, starting with our mother the
Earth. She is a ceremonial First Nations woman and an organizer for Idle
No More.
* Glen Coulthard: Dr. Glen Coulthard is a member of the Yellowknives
Dene and a scholar of contemporary Indigenous politics. He is an
Assistant Professor in First Nations Studies and the Department of
Political Science at UBC. He is a founding member of the Camas Books &
Infoshop in Victoria and the Dechinta Center for Research and Learning in
Yellowknives Dene territory.
* Jerilynn Webster: Jerrilyn is a Vancouver based female hip hop
artist, beat-boxer, performing artist, aboriginal youth educator,
single mother, award-winning actor, and member of the Nuxalk and
Cayauga Nations who is "using [her] words to go upwards/not
backwards." She is an Idle No More organizer.
* Khelsilem Rivers: Khelsilem is a community organizer and language
revitalization activist. Influenced heavily by his grandmother, he always
believed in the importance of being Indigenous, despite
encroachment of a foreign culture, society, and civilization. In this
regard, Khelsilem has pursued avenues where he can strengthen all
aspects of Sḵwx̱wú7mesh and Kwakwa̱ka̱’wakw ways. He is an Idle No More
organizer.
* Lisa Yellow-Quill: Lisa Yellow-Quill is Nehiyaw, Nekaway, Dakota
from Treaty 1: Long Plains, Manitoba. She has many years of experience
providing advocacy, support and counseling to women and families
living with multiple-barriers, oppressions, and experiences of
violence both in crisis situations and in complex long-term processes.
This foundation has supported her ability to be a noted spokesperson on
behalf of Turtle Island’s Murdered and Missing Girls and Women. Lisa is a
Pipe Carrier, Sundancer, and Keeper of several Ceremonies.
* RESOURCES:
http://decolonization.wordpress.com/tag/idlenomore/
http://intercontinentalcry.org/breaking-down-the-indian-act-with-russell-diabo/
http://indigenousnationhood.blogspot.ca/2013/01/what-is-idle-no-more-movement-really.html
http://www.mediacoop.ca/blog/dru/15493
http://rabble.ca/category/tags/idle-no-more
For more information contact Harsha Walia at hwalia8@gmail.com
Organizer: hwalia8@gmail.com
source: http://vancouver.mediacoop.ca/events/15728

Some of the art & the artists participating in the grassroots movement, Idle No More:

Saturday
I learned a new word today: ḵ̓wa̱laga̱lił. It means "coming to life again" and can be used as one way to translate IdleNoMore into the Kwak̓wala language. [from his microblog]


The point is Idle No More has inspired me to dream big.  And to see that really the first obstacle we face is overcoming our disbelief that what we want and need from Canada isn’t possible.  Well if Ghandi didn’t dream of “home rule”, India may yet still be a colony of England.  If MLK didn’t dream, segregation may still exist.  First we dream, we imagine, we envision – and we discard any voices in our head that tell us it isn’t possible.  That is always the first step. ~ CB, from "First we dream" on Divided No More


crossing the line – getting close
closing the gap – moving in
finding the light – standing in it
making the sounds – painting in colour
getting it right – taking names
planning for the future – re-claim
releasing the medicine – pounding the drums
staying connected_ stepping forward
rooted in humanity – giving a shit
reproducing history – recognizing equals
slam dancing  - gathering
letting the answers find us
saying your piece – providing
helping the cause – craving
stealing home – forcing the point
attending to details – walking together
shooting craps – taking it with you
forward…
Read the full poem: http://indiancountrytodaymedianetwork.com/mobile/article/giving-shit-idle-no-more-poem-janet-rogers-146543


Big media tends to blur things into endless oppositions, but the allies of indigenous people are neither invisible nor silent. Of course, there are posters for them, too! 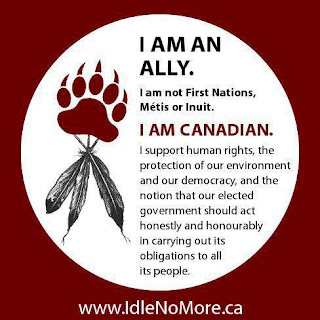 & poems, like Laiwan's 2013, poems for a new era
~a little more about some of the people making the posters~

Personally, I was a bit troubled to see the Four Founding Women and Chief Spence somehow represented by a group of men on the major media outlets: what they had to say was not so much the point, as the fact that it was all men, representing in Ottawa.


Redwire Native Youth Media have their two cds available online,
Our Voices are our Weapon and Our Bullets are the Truth Vera speaking her poem "Justice," track 13 on disc one, is one of many voices of all ages and both genders, and that particular poem has been coming to mind of late. [links no longer available]

When I'm organizing an event, I always strive for a balance of voices, but I guess that's a bit retro, a bit 1970s, to ask that women be given the mike at least half the time: that the cameras reflect back to us who we are in a more encompassing way.

Happily the organizers of tomorrow's event are retro in the same way... all welcome!